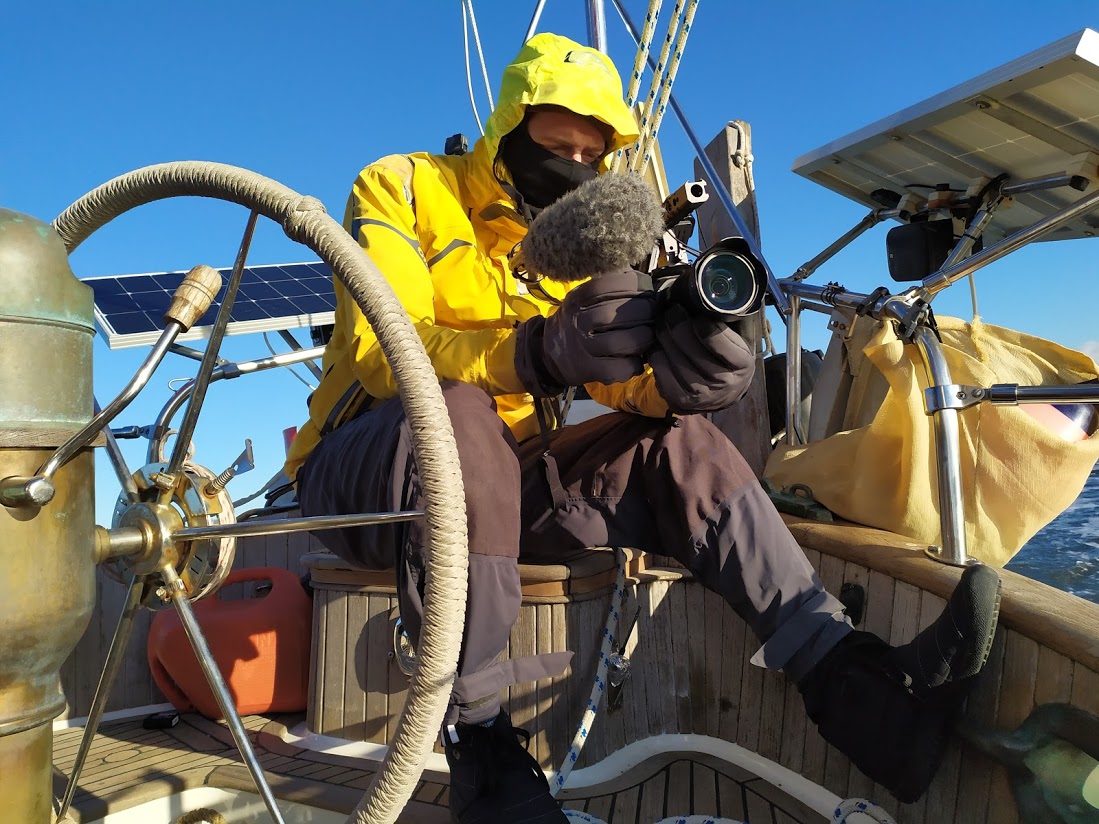 Freezing day sailing down the Chesapeake

We raised our main and shook out the ice, our fingers were barley moving as we weighed anchor and set out from Back Creek.

Wow, cold sailing SUCKS. Jon and I both said we did not want to deal with the even colder night temps, so we were going to break up the Bay with 2 stops.  We had a 3 day weather window before the next strong southerly filled in over the bay so it was now or never. It was because of this, we did not stay long during our over night stops. We dropped the hook at sundown and had it back up come dawn.

From Back Creek we sailed 41.29nm down to Drum Point, MD.  Then it was on down to Deltaville, VA, with our last stop in Portsmouth, VA. Our sails were not that exiting as we spent most of our days trying to stay warm and watching for crab pots.

Sailing into Norfolk and to the free dock in Portsmouth

Before we knew it we were sailing past the lighthouse that marks the shoals off the north side of the Norfolk channel entrance. We had great sailing weather and somehow timed the tides perfectly to allow us to sail right past Hampton Roads, all the navy ships and into Portsmouth.

Portsmouth has 2 free docks which boaters can use for up to 3 days we pulled into the same basin as we did back in October. The wind was increasing as the low pressure system was approaching, we needed a safe place to stay for the next 3 days. The First Street Landing basin was packed, lucky for us there was still 1 spot left for us!  Once we were all tucked in, we put the boat away as it always looks like a bomb went off after a passage and got the aft cabin ready for a guest who will be joining us the following night.

The next morning Jon and I wanted to stretch out our legs and check out the cute town of Portsmouth. The farmers market was happening, but the turn out was limited as most people were smart enough to stay inside during this cold wet weather.  We also wanted to go check in with the visitor center which manages the free docks to make sure it was okay we could stay more than the posted 24 hours due to weather. They understood and said it would be no problem as most boats had already found where they were going to wait out this system the day before.

By the time Jon and I got back to the dock, well lets just say there were no dock. This was the highest we have ever seen the water at this dock.  We hiked up our pants, tucked our shoes into our jackets and climbed our way up to Prism’s decks.

Our good friend Josh (from SV Oleada, who we sailed with from California to Panama 2014-2017) was driving from FL up to Maine and needed a mid-way place to crash. Lucky for us we were right in his path.

It was freezing, the wind was howling and the rain was relentless. Josh had been driving all day so when he arrived to Prism, he was smoked and ready for bed. That however did not stop us all from having a few beers and catching up into the wee hours of the night.

Josh wanted, more like needed to get on the road first thing in the morning if he wanted to make it home that night. It was the same for us, as we wanted to push off the dock and keep making our way south via the ICW. He got lucky and timed his exit well as the tide had not come in yet when we all got off the boat. However for Jon and I as we  waved goodbye to our friend the cold waters filled in over the dock making for a very cold cast off.

Stay up to date by following us on Social Media

Motoring through the ICW Southbound

Whoa, Deja vu. I swear we just did this… only this time it is much colder and we don’t have the lovable company of Jon’s mom on board. As we make our way through Norfolk we make it past the train bridge that stopped us last time only to be held up for over 30 minutes at the Gilmerton Lift Bridge. It was blowing like stink, the current was ripping, it was raining and it was about 20° F. Holding our spot while waiting for the bridge was Prism just doing circles over and over again. Once we were through that bridge we were welcomed with another delay, the lock was closed. The Great Bridge Lock was shut down for the time being because of water levels. On the north side there was too much water, and on the south side there was almost no water due to the large weather system pushing and pulling the water. Great. So we pulled into Top Rack Marina to top up on fuel, pump out and possibly fill up with water. They had turned off the water to the docks the week before ( as it is winter now), but they were nice enough to hook up about 3 different hoses and run it all the way up to the heated warehouse so we could fill up our practically empty tanks. Once other marina visitors saw we were filling out water tanks, there was soon a line for the long water hose. Top Rack Marina was also nice enough to let us stay on the dock till the locks opened again. While we waited the weather had calmed a bit. It was almost  5 hours till the locks opened again, and they were only going to let a few boats through. We casted off the lines and pushed our beta engine as fast as she could go till we make it to the locks and made our way in behind another sailboat.

Once we were out of the lock we knew we could not press on anymore that day as we would not make it to the next anchorage before dark. The free dock at Great Bridge was packed and not to mention almost on dry land. There was enough room for both the boat in front of us and us to fit in the only deep water left of the dock.

While we were at Great Bridge friends of ours were on the other side of the river at the Great Atlantic Yacht Basin Marina. Jon and I bundled up, climbed our way up our rigging to the dock and walked over to the other side to join our friends and the new owners of their boat for dinner.

The next morning we thought we were going to be the first off the docks, but somehow everyone must have sneaked off right before dawn. The only boat left on the dock besides us was a large CaboRico, she was there because she needed the water to rise another 3 feet before her keel would be free of the soft mud. With our coffee in hand, and wearing every piece of clothing we own, Jon and I pushed off from the dock and set into the ICW groove. With less than 10 hours of day light we went as fast as we could while motoring down the ICW.  The tide and current was against us as the water from sound started to flood back into the rivers after the wind died. We averaged 5.5 knts, which is slow for us when motoring, but made it to our anchorage in North River right as the sun was setting.

WHAT ARE THE ODDS?

So a little side story here: The sailboat that was in front of us in the lock, well its name was  “Halfi”.

The crazy part of this story comes months later. While I was looking through photos for this blog post I went down memory lane and noticed a picture of a sailboat from back in 2017.

During our very first ICW experience, which happened to be Snows Cut near cape fear. Jon, Jet and I were so white knuckled trying to stay in the deep water in the not so marked channel we didnt notice the boat behind us was trying to pass. This vessel hailed us asked to pass then offered to help lead the way through the difficult cut. That vessel  was “HALFI”!

What are the odds we would be on the same path once again almost 3 years later?!?

WE actually got to sail a bit down the ICW

It is Tuesday morning and we have over 60nm to travel today, including crossing the Albamarle Sound. Lucky for us the weather looks perfect for sailing! Well we still have to motor quite a bit, but we should be able to sail across the sound and down the Alligator River.

You can tell the cruising season has started and winter is here, the amount of boats heading south on the ICW is almost comical.  Just like us, everyone is looking for warmer weather, or just to feel their fingers again.

Today we averages 6 knts and sailed 62.92 nm in 10.26hours. We got a lot of sailing in, even the Alligator swing bridge stayed open for us as we hauled ass doing almost 7 knts down the river!  Then we dropped the sails and motored thought the 20nm cut that leads to the Pungo River and the Pamlico sound. We dropped the hook in the dark just outside the channel near  Belhaven. We have an early start again in the morning, which is also looking like another great sailing day.

Wednesday morning started like every other morning on the ICW,  with the rush of southbound boats trying to make it out first in line. Jon and I were in no such rush today, we have about 42 nm to travel till we drop the hook in Oriental Harbor. But first we need to sail there.

As soon as we were out of the Pungo river we had the sails up. Starting with the main and the spinnaker. We laughed as we watched 99% of all the southbound boats head to Adams Cut. All these sailing “cruising boats” headed south to go sailing, yet not sailing here today with 15 knts of wind from behind in protected waters.  Rookies.

It was just Prism and one other boat with full canvis up out on the pamlico sound. Every sailor knows what this means…. it’s on.

We hailed the other boat told them they were looking good and we really just wanted to see what we were up against. It was a 35′ IP ( Island Packet for those of you who don;t know the common boat lingo). Well they have a few feet on us, and are lighter, but that did not stop Jon and I from putting a bone in Prism’s teeth. DAMN it feels good to actually sail! As we rounded the shoals and could head towards our destination the winds picked up and now we have 15-20 knts on our forward quarter. YEA PRISM GET SOME! But as any of you know that own heavy boats like Prism, this point of sail is our slowest. I would like to say we held own owns against the lighter and longer boat, but in the end the IP got to Oriental before we did. It was still a great day of sailing which ended with Jon and I forgetting about how cold it was and how much we love our boat.

The free docks in Oriental were full, mostly with the boats that took the motor short-cut through Adams cut so we dropped the hook in the harbor and enjoyed the night.

One thought on “Southbound ICW: Annapolis to Oriental”