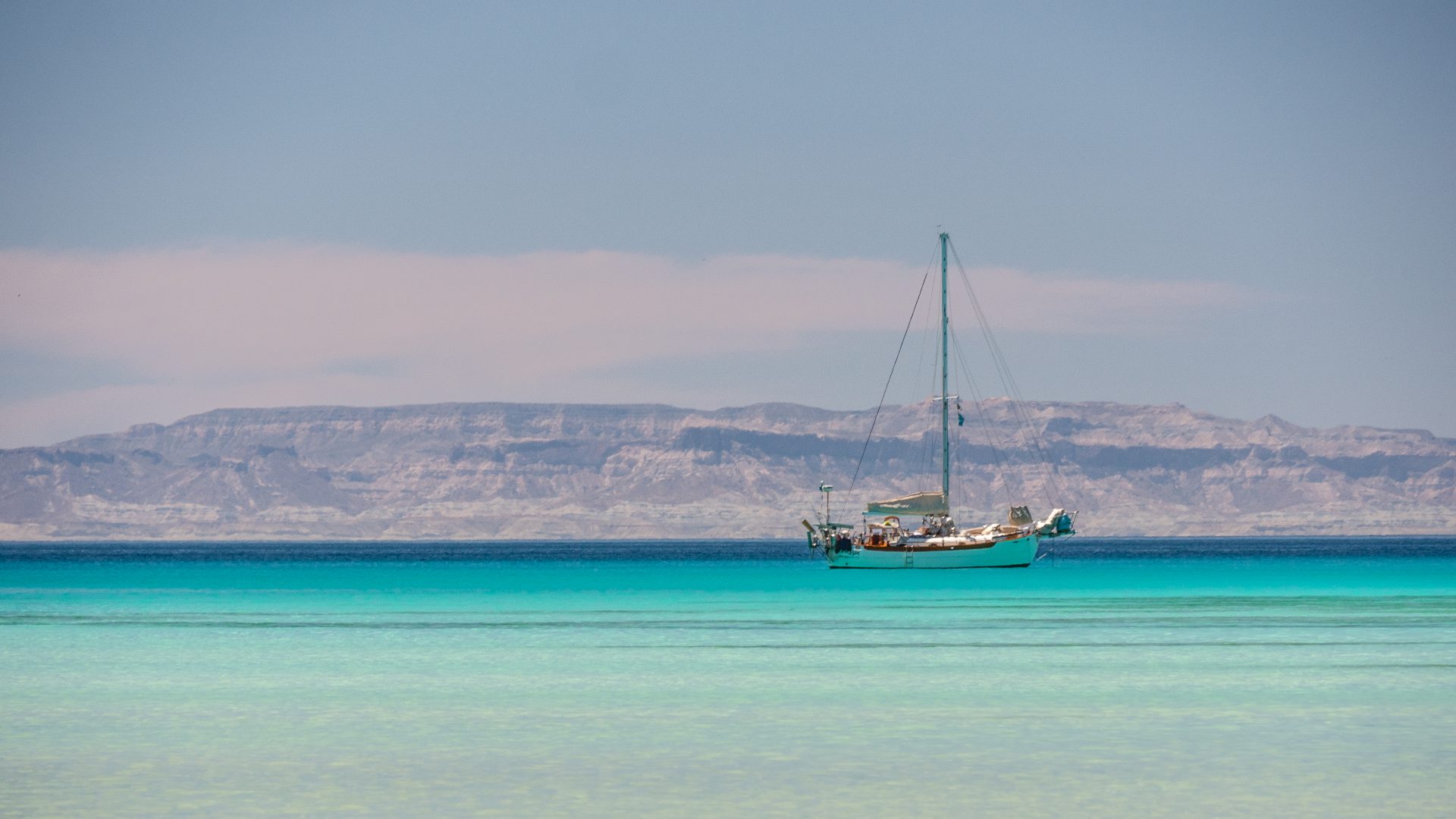 Jon: I grew up in Sierra Mountains. My family were avid sailors, having boats not only in the San Francisco Bay but also on the surrounding lakes near our home at Shaver Lake and Huntington Lake. I not only grew up sailing, but my family is also very passionate about photography and videography. Right out of high school after winning a few film festivals I started working in the advertisement field, then moved on to television. For years, (which helped pay and save for our boats and trip), I worked for a television network called Livewell, shooting the shows Motion, and My Family Recipe Rocks till it was time to leave in October 2014.

Shannon: I grew up in Southern California. My family we were power boaters, we had a 42′ Californian, and a mooring in Emerald Bay at Catalina Island. My love affair with the ocean began at a very early age, spending as much time as I could with a mask on and my face buried into the ocean looking for any and all marine life. After high school I began working as a dive master for San Diego Shark Diving Expeditions, and loved spending my time looking, diving , studying, and playing tug-o-war with great white sharks at Guadalupe Island off the coast Baja. My sailing experience when I met Jon was slim to none, having only sailed on little sunfish boats while I was a kid at the very camp where I met Jon as an adult.

Our story ( the quick version):

We met back in 2009 while we were both working for Gold Arrow Camp, a summer camp located up in the Sierra Mountains.  We started to look for our first boat after Jon asked Shannon ” How would you like to sail around the world?” ( talk about a one liner right!)  Our first boat adventure involved a small pocket cruiser called a Caliber 28. The boat was in very rough shape, so we spent over a year doing a total refit in a backyard in the middle of the central valley. Once she was done, we renamed her “TARA” and set of! After a few eye opening passages and living on her for a year we decided TARA was not the boat for us. You can read about our first adventures at http://www.tarasmaidenvoyage.blogspot.com. The story picks up with the first post to this blog back in 2013.

History and Facts about the HC33

At first glance you’ll notice the springy sheerline, large bowsprit and a cutter rig that’s become a favorite among blue water aficionados. Overhangs are quite moderate making for a long LWL for her size and a good hull speed. Below the waterline is a full keel with an aggressively shaped forefoot cutaway and a large rudder that’s hung at the very aft extremity of the boat. Compared to previous Hans Christian boats, the turn of the bilge has been tightened up and the HC33 carries more shoulder in the underwater sections which has resulted in more form stability (righting effort).

She was one of the more innovative boats at her introduction with an internal layout that utilized every nook and cranny that even today has yet to be surpassed. Ives, having designed the previous 38T, 38MkII and 43 moved the interior furniture outwards closer to the hull. The galley was located below the deck and molded fiberglass tankage (both water and fuel) was located in the keel cavity for stability.

What separates the HC33 from the larger boats in the Hans Christian line is her exceptional ease of handling, we’ve heard of a 90 year old skipper who sailed from San Francisco to Turkey with only one crew in tow. Given this and the massive amounts of cruising gear the HC33 can swallow, as much as the HC38 and even the HC41, it’s believable to hear of older owners offering straight swaps of their larger Hans Christian model for the HC33.

Under sail, she’s seakindly without the tendency to bounce or bob over waves and owners report hoving-to in relatively high comfort when the going gets rough. Fully laden at over 25,000 lbs in typical cruising trim there can be no expectation for fast passages yet the HC33 can perform well, you can expect easy 125 mile days in the trades and we’ve heard of a 7 knot overall average from Mexico to San Francisco via Haiwaii. On the lighter end of the wind spectrum, when Yachting Monthly took a factory fresh model for a boat test in flat water and 5 knots of true, they reported slipping along at 3 knots managing to tack through 95 degrees of angle and making 4.4 knots on a reach with 8 knots of wind.

The HC33 was commissioned by Hans Christian Yachts founder John Edwards around 1979 to replace the Hans Christian 34 and her unauthorized stretched sibling, the 36. Various disagreements over the two boats, not only with designer Bob Perry (who did not receive royalties for the bootleg 36 stretch) but also the Union boatyard that owned the molds meant a new 33 would be the easiest path out of strife for Edwards.

By then, Edwards had engaged a new designer, Harwood Ives, described as creative with an uncanny eye for lines, and shared Edwards’ love of traditional boats. Having designed the 38T, 38MkII, and the 43T in the direction set by Perry, the HC33 became Ives’ most technical design challenge to date, resulting in many clever innovations which helped set the course for many boats in what has been described as the “Golden Age” of Taiwanese boatbuilding. For Ives’ work on the Hans Christian boats, it’s interesting to note his payment was his own HC33 from the factory.

The first boats were built at Hansa Yachts Und Shifbau, a new yard located in Taiwan with state of the art facilities. The yard itself was built by former Hans Christian employee Herbert Guttler (a German engineer noted for his genius as a boatbuilder) and his Taiwanese wife, Susan. Hansa continued construction from 1980 through to 1987, the year Hans Christian Yachts ownership passed to its new owner Geoffrey White. Shin Fa Industries, a boatyard located in Taipei, Taiwan took over production in 1988 and these boats, although good, never match the exceptional quality attained by Hansa.

In 1990 Hans Christian operations shifted to Thailand in search of lower costs under the twin pressures of a recession and a Taiwanese luxury tax. In Thailand, Edwards set up a company with the lofty name of Dutch East Indes Trading Company (DEITC) to carry on Hans Christian production for its new owner. We believe one HC33 was constructed in 1992 before production properly recommenced in 1996 under Andersen Yachts Ltd, the boatyard that had essentially risen from the ashes of DEITC.

By 2003 when Andersen’s owner sought retirement, its production manager, a Kiwi by the name of Jack Hall migrated production to his new facilities in Pattaya operating under his own company, Pantawee Marine Ltd. Pantawee presently manufactures all boats from the current Hans Christian line and the Hans Christian 33 is available for purchase at the base price of $297k USD.

In all 155 boats have been produced with the last recorded build in 2009 which shipped to a European dealer.**

We started in Washington 2013 and now 9,283 nautical miles later, we are on the east Coast of the US. Jon and I have uploaded our tracks so you can use them for a reference . If you would like them, you can click the blue link to  Download Prism’s GPS Tracks

The files can be input into your Chart-plotter devices for reference only. PRISM’S tracks are not to be used for navigation. They are compatible with most charting systems

The ever changing plan

We have the dream to getting to Europe some day on Prism, how to get there is an ever-changing plan, there are just so many options to get there! But for now, we think this is the route Prism is going to take……. posted as the plan changes:

As of February 2020: Well the plan keeps changing. We are now staying state side for this winter season. We plan on spending the summer season in the Chesapeake or maybe higher before heading off Fall 2020 back to Panama. Not sure where we are going to go after that, but the Sea of Cortez sure is calling our names once again.

As of October 2019: We are sick of the cold. The plan is now that the refit is done and Prism is looking the best she ever has, is to head back to the San Blas Islands of Panama. Prism is set up for warm weather sailing as the refit left no budget to add cold weather gear. So we are heading back to the El Carib to warm our bones, tan our bodies and get back into the cruising lifestyle.

As of August 2017: Prism is living out the summer on the East Coast. When we get back in early  2018 we plan on a short trip out to the Bahamas. —->then back up the East coast to summer in the north states as we keep hearing amazing things about Maine. Then———->Crossing to Europe (still not sure where we are going to land). We plan on exploring most of Europe for as long as we can, I know Jon wants to see the Baltic. Then——-> Head down and ride the trades back to the Eastern Caribbean.

Jon also someday wants to do the North West Passage (burr) I would love the chance to dive in the Red Sea…so many options!!!