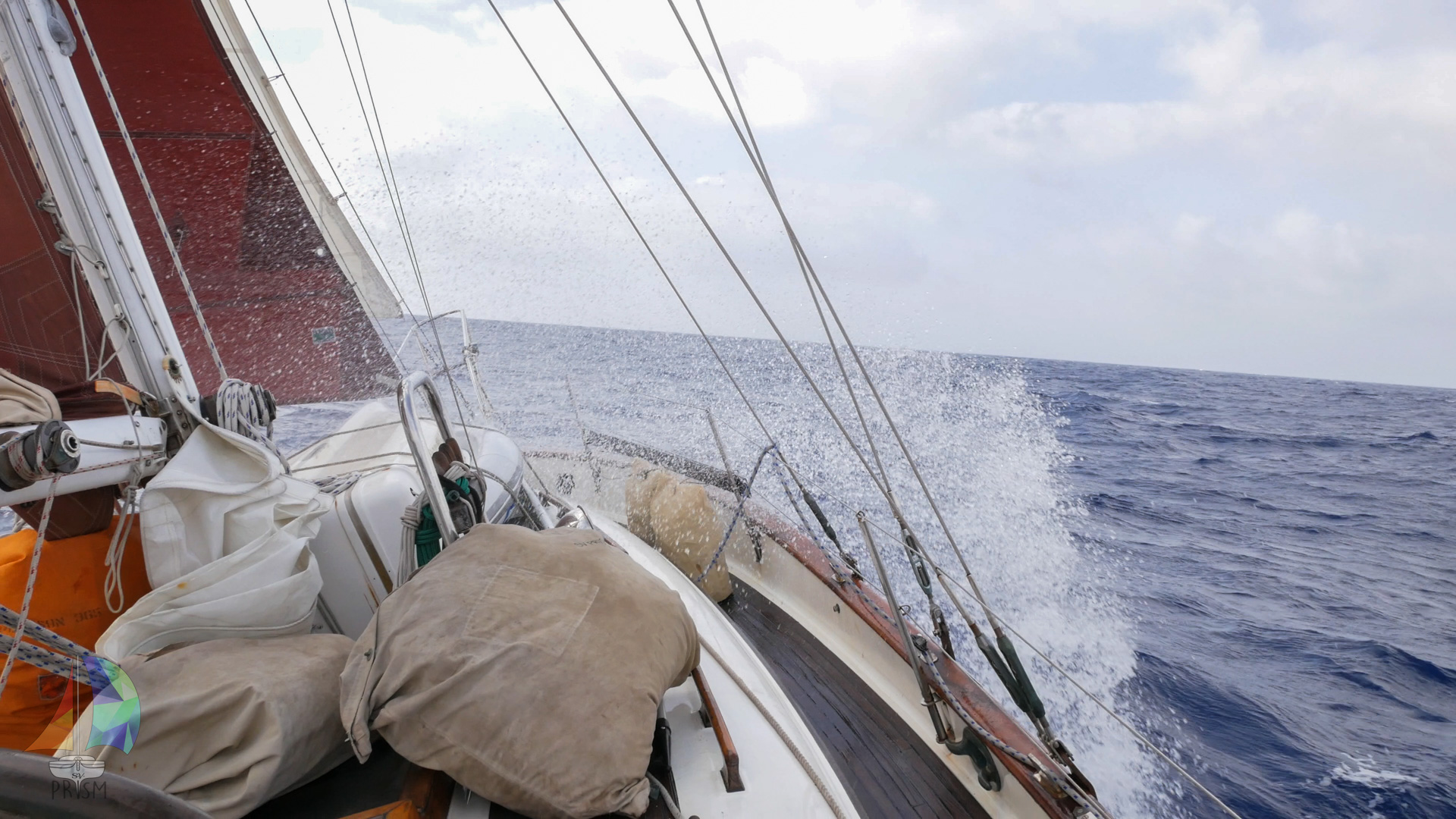 When we told people about the route we were planning on taking… people looked at us like we were crazy! However those people were also people who had never done the passage themselves. We had met almost 10 boats while in Panama who had done this Passage with all kinds of jumping off points, but all heading for the Caymans. We met cruisers who left from Bocas del Toro ( most stopped at San Andres or Providence to break up the bashing), some left from Shelter Bay/ Colon or the San Blas (like us) and most jumped off from Carthagena.  Depending on the weather, current, the type of boat and the jumping off point will all be factors when making landfall either at Cayman Brac to the east or Grand Cayman to the west. Clearly you can break off a little earlier and ease the sheets if you head right for Grand, but we were determined to keep our easterly heading and aim for Cayman Brac……This is how our passage went……..

As we motored away from the San Blas Islands Prism and her crew were being baked by the sun and lack of wind. The seas were flat and looked like oil, there was not a lick of wind. We had to hang temporary shades in the cockpit to keep at least a little cool. The auto pilot was doing all the work, as we were all looking up and out every few minutes to see if there was any traffic. The whole afternoon progressed like that, no wildlife no traffic no nothing. We used the calm to motor NE, to get as much easterly progress as we could to possibly make out passage not so “on the nose”

The 3 of us had decided on a 4 hour watch schedule for night shifts. During day light hours we have a loose schedule as who ever is up is on watch and who ever wants to catch some sleep can. So as the sun set we had dinner and a cocktail then started the shifts. Jet was up first with the 8-12 shift. Wouldn’t you know it, as soon as her shift started the wind picked up coming right out of the NE. So we raised the main, the yankee and the staysail and broke off just a little, with a heading of about 12 degrees. Full Canvas! Jet said she had some traffic, but they all passed behind us and the wind stayed the same. Jon was up next 12-4am. He had the same kind of shift, traffic was all behind him and the winds stated the same. Then it was my shift. 4-8am. Lucky for me I one have about 1.75 hours of darkness, then I get dawn and the sunrise 🙂 oh yea! I had zero traffic and the winds stated the same.

Friday started off great, we had full main, yankee and staysail. Winds were out of the NE blowing 10-15 knots with the swell on our beam but less than 2 meters. Well that was until friday afternoon. The winds picked up…15…18….20…23…..25… and along with it came 10-14ft confused swell from the ENE. Joy…… lets just say dinner was light. We were down to a double reef main, yankee and the staysail. By the time our shifts were starting we had waves crashing into Prisms beam, sending green water up and over her decks. If the right swell hit at the right time even our  “very dry” cockpit would take water over the gunnals.

While Prism spent a a bit of time under the water we found some leaks we never knew we had. The midship gunnel cleat was not happy about its submerged status, as it gave up and let water inside our boat. Luckily Jon noticed the leak before the water reached our books and computer gear. We stuffed towels into the area where the water was coming in, then the books and gear all lived on the Salon Dinette for the next 4 days.

Jon’s watch was much the same, we had to bust out the full foul weather gear to stay dry and warm during our shifts. Lucky the wind was enough to help Prism power though the larger swells, and the stars were out acting as a great distraction and time pass for the watches.

My watch was a little lighter, we still had the double reef main and we were down to just the yankee, but I never had a breaking wave over the deck like the other watches did.

As the day progressed the winds started to back down to the low 20’s and high teens. The swell was still just as confused but was also dying down. We were still screaming along. At times we could shake out one or both reefs. Prism was still hard on the wind, with the port side at times under water, which for those of you who know how the HC33’s sail… its hard to do.  As the day progressed the swell dropped down to about 2.5 meters, with only a perfect timing set sending water into the cockpit.

Jet and Jon both had wet watched, but for me once again… with my perfectly times watch choice… I stayed pretty dry and had no waves crash over the boat.

We are starting to feel human again! I could actually make breakfast. We have all gotten used to the motion of the boat and have found our groove. The night watches are staying the same. We would put a second reef in the main if it was not in already just incase a squall decided to show its face. Although none ever came out way. During the day the wind was back down in the high teens and we pushed Prism along with full canvas up. The wind started to shift a little bit more from the East which was a godsend as we got to ease the sheets during those periods. Prism at times would slap against a larger swell that would send bone crushing booms throughout the boat.  At this point we entered the beginning of the Gulf Stream, we could not keep Prism under 6 knots! She screamed along in the high 7’s and even into the 8’s!

Now were are all totally in the groove, we are eating full meals, smiling, joking and purely enjoying the ride. If we had kept up our speed in the high 7’s during Sunday night for the whole day we could have reached Cayman Brac just before sundown, but tat didn’t happen. So we did all we could to slow her down. At her current spend we would be reaching Cayman Brac around 2:30 in the morning! So to make  a nice dinner I asked Jon to ease the sheets, take down a head sail… anything we could to level out the boat and slow her down at the same time so making a huge pot of chicken and dumplings would not become a danger in the galley. Funny thing was, no matter what we did Prism still charged forward at 5-6knots! We could have hove to, but Jon wanted ti keep forward momentum. So we put a double reef in the main, and tried dropping both head sails, but Prism did not like that, so then we raised just the yankee, and she tolerated that. Just long enough to make dinner. Once we were fed and dishes were done, we raised the sails again and once again moved along at 6 -7 knots!

As  we were getting ready to start the night shifts Jet looked forward and said “ um that’s a lot of lightning ahead” Sure enough a huge squall, still very far away but the bolts of lightning lit up the whole sky. And here I thought we were going to make it through the whole passage with zero squalls. I went to bed nervous, but also glad that my watch didn’t start for another 8 hours. A LOT can happen in 8 hours.

Jet watched the squall approach us for her whole watch, but did not have any change in wind or waves. Once again Prism doing all the work as her crew just made sure to keep an eye out not to hit anything. Jon had the same kind of watch. But he watched the squall pass miles in front of us! Phew… we dodged that bullet, as the squall looked huge and extremely unfriendly. Around 3:00am we entered Cayman waters and had to hail Port Security. I still had an hour until my watch, but our VHF is right next to our bunk so I was awake. A little later I joined Jon on deck to watch the lights on Cayman Brac and the last of the stars in the sky. We were about 15 miles from our destination. We were so close that Jon did not see the point in going to bed.

As dawn approached we finally changed out our head sails. The wind was coming completely out of the East and we were about to turn to the west. The early morning winds were light so we hoisted up the drifter. Jon and I jibed the boat to round the huge bluffs, which sent all the stuff that had found a snug home one the port side over the last 5 days flying to the starboard side! ha. we did not plan for that.

As the sun came up, we hoisted our Q flag and the Cayman Flag that Jet and I had made before we left the San Blas. The sunrise was beautiful, and we woke Jet so the whole crew could enjoy the warm colors of the sun hit the huge bluffs! We were all so excited to be so close to our destination!!

As we approached the mooring ball that we were instructed to use and we could not hide our excitement as we sailed in 80+ feet and could see the bottom and all the coral as if we were in 5 feet of water!

Okay the overview of our passage:

Not bad for a dumpster found yankee, a 35 year old main and original staysail…

Did I mention that we screamed along during this passage? At times the weather was annoying and wet but Prism handled it so well! All her crew had to do was hold on and enjoy the ride. I think Prism did a great job for being what people like to call a “slow boat” I mean we kept a 6.2 knot average to windward!! that’s crazy!

2 thoughts on “Sailing the Caribbean “Hole”; San Blas, Panama to the Cayman Islands”