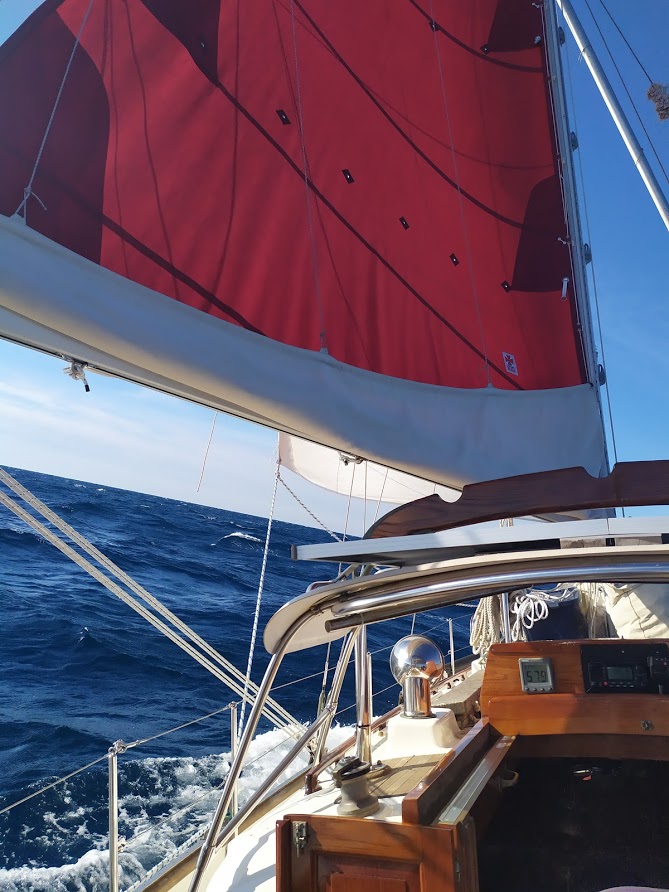 Southbound, Outside Passage to Charleston

Dec 6, 2019
The weather window had arrived, there was a small window of light north winds for about 2-3 days before the next nasty norther starts to blow. Our first destination south is Charleston, South Carolina. Neither Jon or I have ever been to Charleston and had heard great things about it.

We were up at dawn and ready to hit the open ocean, but first we needed to motor to it via the ICW and through Adams Creek. We knew our passage was going to start as a motor even once we got out of the ICW, so we stopped and filled up our diesel before leaving the Beaufort inlet. The seas were calm, the tide was high and the sun was out, all we needed was a puff of wind to shut that purring motor off. The wind did not show itself till the wee hours the next morning. As a light north wind filled in from behind we raised the main, then more wind, so we raised the jib as well.

It felt so good to be actually sailing, and not only sailing, but moving fast enough that if we pushed it we could make the Charleston inlet by sundown. Meaning we would not have to slow down and wait till the next morning to go in. However around 2pm the wind started to get a little light, so we decided to motor-sail to keep up our speed. It was a good thing we did because as we rounded the channel marker guiding the entrance into Charleston as the sun was just about to set.

Prism surfed the crashing waves through the channel markers and in past the underwater jetties till we were welcomed into Charleston Harbor. Once we were in the inner harbor it was pitch dark, but the city lights were very bright which made it difficult to see the lighted channel markers. Once we were out of the main channel and were done dodging the large ship traffic, we started to look for a place to anchor for the night. The designated anchorages were packed full of abandoned boats and crab pots, all of which we did not want to get caught up in. We played it safe and chose to anchor a bit out of the normal areas and hoped for the best. In the morning we would weigh anchor to find a “true” anchor spot.

We ended up anchoring on the south side of Charleston right before the lift bridge. A fellow HC owner, Chip was kind enough to let us use his slip as a dinghy landing so we could enjoy Charleston without being charged the exorbitant dinghy dock rates at the marinas.

Chip just bought his HC33 and she is a beauty named Marisol. He took us out on the town to get what he says is the best BBQ in Charleston. After the literally finger-licking good BBQ we hung on Marisol for some beers and to talk about the slight differences between our 33 and his. The following evening Chip and his wife took us out for a great Mexican dinner.

Exploring the historical sites of this city was a must-do for both Jon and I, we just needed the rain to take a break so we could get out and enjoy. Most cruisers end up getting a slip at a marina to use their free shuttle buses into downtown as they think the marinas are just a little too far away to walk. Jon and I however, walked. It really is not that far of a walk, maybe 20 minutes from the marina till we were in the middle of it all.

We explored the farmers market, enjoyed the live music, and walked through all the National Park buildings. I brought with me my National Park passport book to get my stamps.

The next day we reached out to some old cruising buddies we met in Mexico and sailed to Panama with, SV Sirena. Chris and Shawna picked us up to enjoy a night of homemade chili and drinks aboard their boat located on the other side of the harbor. It was good to see them and catch up.

While anchored during the rain in Charleston Harbor, Jon and I would tell ourselves we really need to start working on updating our dodger. Our dodger is so sad looking compared to everything else on Prism right now. Plus while we were in Oriental we bought new glass and we still have Sunbrella leftover from when we made our stack-pack back in 2014, so getting this project done should be easy. However, the new glass which is Makrolon VR made by Tuffak, it is way more rigid than your standard Stradaglass material. Makrolon VR (Vinyl Replacement) is a highly flexible and sew-able polycarbonate. But because it is semi-rigid and came in 4X8 sheets, we needed a larger workspace to cut out our windows. Que in our new friends Leigh and Kevin. Leigh reached out to us via FB when we sailed into the Harbor as they have been fans of our channel for a while and remind us constantly to make new videos 🙂 Anyways, they reached out and wanted to take us to lunch and let us use their home to work on our project. We were thrilled for the opportunity. Little did they know, we were going to be taking over their living room floor for 2 days. Oddly enough they were also in the middle of some sewing projects for their own boat “Deseritata” a Dickerson 41′. So we worked on cutting out the glass, then we drank, ate dinner, and played a heated game of dominoes. Our days and nights spent with this lovely couple has turned into what I think will be a life long friendship.

We did not finish making our dodger, but we did get everything cut out. We needed to keep moving south, so we started to get Prism ready to jump offshore once again. This departure was pushed a few days as Jon came down with a type of 24-hour stomach flu and was, well, incapacitated. Once it passed we waited 2 more days just in case I got it too. I seemed to be in the clear so we set Prism up, went to bed, and slept till dawn.

One thought on “Charleston, SC”